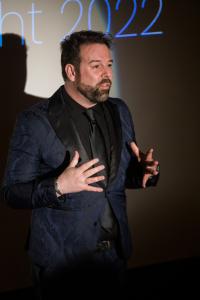 Maarten Cornelis, the founder of the Producer’s Night.

Film industry leaders attended Cinematory’s annual event, Producer’s Night, where they were treated to
the best films from over 20 partner film festivals

LOS ANGELES, CA, USA, December 15, 2022 /EINPresswire.com/ — On December 9th 2022, Cinematory hosted its second edition of the Producer’s Night at The Strasberg Theatre and Film Institute. An excited crowd of film industry leaders and film lovers attended the event where they were treated to the best films of 2022 cherry picked from over 20 partner film festivals.

“Producer’s Night 2022 was an incredible success,” says Maarten Cornelis, Founder. “The excitement for our event keeps growing every year and was definitely the talk of the town last week. As we keep developing a community around this event, we know that we are part of something special. We are happy to announce that more festivals will be joining our group next year, solidifying the importance of an event like this. See you next year, my producer friends!”

Kris De Meester, curator of Producer’s Night, adds: “What started with over 25,000 entries from over 20 partner festivals resulted in an official selection of 7 gems. Made by extremely talented new voices in the industry. After ending up with an Oscar nomination, last year, for our ‘film of the year’ Ala Kachuu, the expectations are high for the 2022 ‘film of the year’ Ousmane”

The team at Producer’s Night wants to say a special thank you to actress Rachel Bailit, for hosting this year and bringing her enthusiasm to the project.

The lively catered event, founded in 2021, was the second edition in what will continue to be an annual tradition from Cinematory. “The objective is to give these filmmakers the exposure they deserve. We created this event with the goal of helping the films reach a wider audience and the filmmakers to connect with people in the industry,” said Cornelis of Producer’s Night.

The following partner Film Festivals submitted the best of their entrants to Producer’s Night:

The movies selected this year were:

ONCE THERE WAS III (USA) BY NINA MCNEELY

I LOVE YOU DON’T LEAVE ME (USA) BY ALEX LEOMBRUNO

LOSING IT (AUSTRIA) BY SASCHA VERNIK

BEFORE THE EARTHQUAKE (SWEDEN) BY GUSTAV HUGO OLSSON

From the official selection, Ousmane was voted ‘Film of the Year’ for 2022. Congratulations!