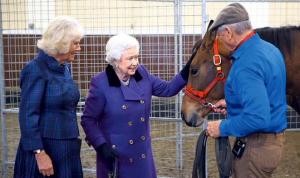 Queen Elizabeth II is shown a horse by renowned trainer Monty Roberts. The late regent was a patron of Mr. Roberts’ Join-Up International, which provided the photo. 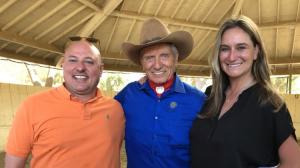 Left to right: Marty Irby, Monty Roberts, and Ashley Avis at The Movement in June of 2021 in Solvang, CA 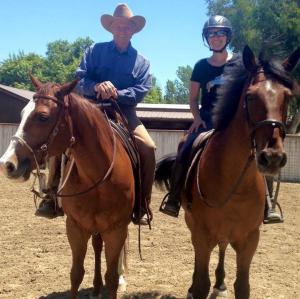 A close confidant for nearly half of Her Majesty’s reign, Roberts called her roughly 200 times and not once did she fail to come on the line and talk with him

It should be noted that my relationship with Her Majesty included numerous personal visits and over 200 telephone conversations. ”

— Monty Roberts, the ‘Man Who Listens to Horses’

The death of Queen Elizabeth II, September 8, 2022, encouraged me to collectivize my thoughts on my life. Born in 1935, I was the son of a father who believed violence was the answer to raising a child. The CAT Scan and the MRI in the 1981 revealed a massive number of fractures which were identified as happening prior to the age of puberty.

While there was much violence in my life, I was fortunate to grow up in the presence of horses. There was no question in my mind that I was to be a competition rider of these wonderful animals and I was further fortunate enough to win 11 world championships from their backs.

A grammar schoolteacher knew my father and encouraged me to stop blaming him and to simply go forward with the goals of my life in a non-violent fashion. Sister Agnes Patricia, a Notre Dame nun, encouraged me get the best education possible. She suggested that my major should be ‘behavioral sciences’ for which I now have two doctorates.

At the age of four, I won my first competition and was contracted to become a stunt child because at that time three out of five movies included a horse and a child. I grew to love my horses and I struck a horse for the last time in 1949. It was at the insistence of my father but never to be a training method after that incident.

As a teenager my work included time with American Mustangs, and it was those fragile flight animals that I discovered they could communicate with me, and I could communicate with them. The horses, along with wild deer, trained me to use this language and refrain from any violence in the training process. These concepts established my goals for life.

In 1965 a wealthy individual who came to California from New York decided that I should move my equine work to the world of Thoroughbred racing. I had completed my first university work in PTSD for returning Korean veterans. My racehorses took up these principles and earned dozens of championships in that discipline.

My wife, Patricia (Pat) helped immensely to raise our family, accept foster children, and assisted me with the design and operation of the Thoroughbred farm for more than 50 years. It was on that farm that an open house caused two articles to be published in US magazines. These articles explored my work of training racehorses in the absence of violence.

It was divine intervention that caused these articles to end up on the desk of Queen Elizabeth II, whom, along with me, believed that horses could be trained in the absence of violence. I had already made inroads in South America and in 2005, my daughter and I visited Shelbyville, Tennessee which was the home of Tennessee Walking horse.

Marty Irby was the manager of a massive Tennessee Walking horse operation there. He saw my work and brought an end of his acceptance of violence in the world of the Tennessee Walking horse. Marty moved to Washington, D.C. to influence legislation removing the violence from these wonderful horses and broadened his spectrum to include all disciplines.

Her Majesty, Queen Elizabeth II read the two articles and dispatched horse manager, Sir John Miller, to travel to California and view the non-violent work, I was responsible for. Sir John came to us and saw my training with untrained Thoroughbreds to report back to Her Majesty. A date was set, and Pat and I were to travel.

When we arrived at Windsor Castle there were 23 untrained horses waiting for us in the fields immediately in front of the Queen’s windows. I was admonished not to go near the horses and, Pat and I were to go with Sir John Miller to his home near Oxford. All of this was on Saturday afternoon and training was to start on Monday morning.

The first horse entered the riding hall at about 9:00 in the morning and an audience of about 200 was to witness a three-year-old filly take her first saddle and rider. This filly was owned in the name of the Queen Mother and had never received any training except to lead by halter.  The Queen Mother was there and was skeptical but hopeful.

As I recall that first Thoroughbred three-year-old accepted the saddle and rider in approximately 27 minutes. The Queen Mother came to me first with tears streaming down here cheeks. The Queen followed shortly after, and both were amazed that the predicted outcome had been accomplished. There were some discussions and then a break for lunch.

While at lunch in the Windsor Gardens, the walkie talkies were going crazy between members of the Queen’s staff. Upon returning to the hall, we found that two three-year-old one ton draft stallions had been delivered without any prior announcement. In the first moments one stallion aggressively chased Sir John Miller out of the round pen.

Several conversations took place to outline the plan for the balance of the week. One was that all 23 horses were to receive their first saddle and rider. Another was to say that Pat and I were to travel in the Queen’s personal car to 21 locations within the UK. Her Majesty was personally setting up a tour which would include 98 horses.

England, Scotland, Wales, the Isle of Man and Northern Ireland were on the schedule. All horses passed the test without one failure. The task was completed with approximately 30 minutes per horse. Terry Pendry was assigned to be with us on that tour. At our last stop Terry Pendry did a Join-Up complete with rider in less than 30 minutes.

While the Queen and those closest to the tour were complimentary, but many traditional horsemen had very negative comments to make. These were not individuals who saw the non-violent training that was done to accomplish this task. Her Majesty was steadfast in support of my non-violent principles.

There was a one-hour meeting at the conclusion of the 30-day tour. The Queen was extremely complimentary but made some strong comments about what was hoped could happen next. Her Majesty’s first words were, “There must be a book. It should be published in as many countries and languages as possible.” This happened.

Her Majesty went on to say that I should personally travel to as many countries possible to conduct live demonstrations of the non-violent work that had been witnessed. I traveled to 41 countries and worked with horses of varying disciplines and many that were dangerous, remedial horses which had experienced violence in earlier training.

More than 3,000 horses made up the list of the three decades of travel to accomplish these demonstrations. Covid put an end to the demonstrations, but I continued my work with several large stables, mostly by Zoom after the Covid restrictions. Well over 50 championships were earned with the stables I represented prior to Covid.

It should be noted that my relationship with Her Majesty included numerous personal visits and over 200 telephone conversations. It keeps coming back to me that Queen Elizabeth II was “the wind beneath my wings.” In no way could I have reached the entire world without the endorsement of Queen Elizabeth II.

When one studies the circumstances surrounding the over 30-year relationship, it is evident that the number of miracles to accomplish these tasks could not have happened without guidance from above. I will spend the balance of my days doing as much as I can to achieve the goals Queen Elizabeth clearly set out for me.

Monty Roberts, the ‘Man Who Listens to Horses,’ is a New York Times Best Selling Author, multi-titled World Champion equestrian, and founder of Join-Up® International who resides in Solvang, California.