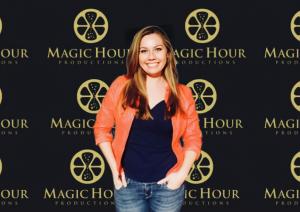 Mariya Pyter gets a directing gig as Magic Hour Productions unveiled that pre-production of “With A Whimper” has already commenced.

“The goal of our managing team is simple, producing character-driven films in all genres and furthering the art and craft of film.”
”

LOS ANGELES, CA, UNITED STATES, August 24, 2022 /EINPresswire.com/ — Production and finance company Magic Hour Productions, INC is now launching the pre-production of “With a Whimper” with Mariya Pyter, who will be serving as the movie director at its helms.

Mariya Pyter started in the industry years ago as she gained experience on The Dr. Phil Show (CBS). Later, she finished her Directing program at UCLA Extension and co-founded Magic Hour Productions, INC. in 2013.

Mariya Pyter is best known for her directorial debut, a documentary on disability titled “22”. The movie received worldwide distribution at the time and is currently available for purchase on Amazon. And now, Mariya is planning on making her narrative feature film directorial outing with the cosmic horror “With a Whimper.”

The script of the movie has been written by Devin Fearn, who takes inspiration from philosophical ideas and themes of the Lovecraftian universe. A graduate of the University of California, Los Angeles, Devin Fearn is the recipient of multiple world-recognized awards and nominations at such screenplay competitions as UCLA Screenwriter’s Showcase, ScreenCraft Horror Screenplay Competition, and Samuel Goldwyn Writing Awards.

Magic Hour Productions, INC, founded in 2013 by the creators of “On the way to Lovetown” and “22”, has announced a slate of film projects consisting of horror stories, historical dramas, and animated content to be released through their worldwide distribution partners.

The slate was revealed on Wednesday at the “Movie Hour” Virtual convention, which Magic Hour Productions, INC reportedly organized. “The goal of our managing team is simple, producing character-driven films in all genres and furthering the art and craft of film,” said co-founder John Harney.

The previously announced “With a Whimper,” set for production in the winter of 2022, is among the slate. Several short-form animation projects, including the adventure “The Kiln” and “Grandpa,” as well as two historical dramas with the working titles “Goring and Souers” and “Nazi Mistress,” are also in development.