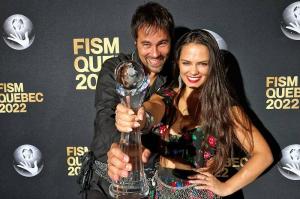 At the 28th FISM World Championship of Magic in Quebec City, Canada, Anca & Lucca won the gold medal in mental magic with “The Mind-Reading Revolution”.

Grateful to be world champion, but I do have one regret – I wish I had had the chance to dance a tango with Pope Francis, a tango aficionado himself, as he was literally metres away in Quebec City.”

VIENNA, AUSTRIA, August 2, 2022 /EINPresswire.com/ — At the 28th FISM World Championship of Magic in Quebec City, Canada, with 110 competing artists, Anca & Lucca won the gold medal in the category of mental magic with a new version of their mind-reading act “The Mind-Reading Revolution”.

Their success is no coincidence. Since 2015, the two magicians have qualified for all FISM World and European Championships, winning three silver and two gold medals in five competitions, making them the mentalists with the most FISM medals of all time.

Their mystical-humoristic depiction of an ethnic clairvoyant based on Anca’s Transylvanian heritage convinced the jury and was rewarded with standing ovations coming from the audience of 2,000 magicians. Their award-winning World Championship mind-reading act is available in English, German, Romanian, French and Italian, which is another unique quality of their work.

“We are delighted that our decade of work has been recognized again. Winning the gold medal is simply unbelievable!” the two artists rejoiced when they returned home to their children in Austria on the 1st August.


Anca & Lucca’s demonstrations of mind reading, prediction and clairvoyance are so unbelievable even for other magicians, that they renewed their notarized $1 million pledge at this World Championship of Magic. Anca & Lucca never use any pre-arrangements, secret assistants or electronic devices for their performances, naming their performances “mental magic unplugged”.

Along with their achievements, their backgrounds are equally fascinating and have helped build up their artistry: while the Viennese Lucca has been an utmost perfectionist in pushing the limits of mental magic for the last 25 years, the Romanian Anca has changed her life completely after falling in love with Lucca in 2011 and eventually gave up her corporate career in order to become a professional magician.

Prior to magic, Anca had been dancing since she was 6 and considered a political or corporate path after receiving at the age of 18 a flattering letter from Dr. Henry Kissinger for her correcting remarks on his book “Diplomacy”, while studying a double major in International Relations and Business Administration. Anca eventually became a business consultant, while privately continuing to perform as a ballroom dancer, her life-long passion.

Lucca, an artist and philosopher at heart, has always been purposeful and driven to create incredible magic, while being quite a political animal himself. As both Anca and Lucca are avid defenders of human rights, interested especially in the emancipation of women, they have thus attracted each other and created a new realm in magic where the woman is no longer the master’s assistant. Through mental magic Anca finally found a focus point for all her interests.

Their love story and journey towards working together are the central themes of Lucca’s book “The Art of Amazement” and of their theatre show “The Mind-Reading Revolution”, which they plan to bring on tours to the English-speaking public.  Asked how do they feel after winning the world championship title in mental magic, Anca responded jokingly “Grateful and happy, but I do have one regret – I wish I had had the chance to dance a tango with Pope Francis, a tango aficionado himself, as he was literally metres away from the Congress Centre where the World Championship of Magic took place in Quebec City.”