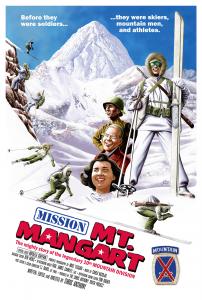 International Documentary Features Legendary Story of the 10th Mountain Division in Italy: Before they were Soldiers, they were Skiers.

While many books, films, and stories have recounted the 10th’s history, Mission Mt. Mangart delves into the untold tales of the 10th, which Anthony brings back to life. The documentary portrays a unique perspective shared by skiing professional Chris Anthony, who serendipitously stumbled upon the Division’s exploits while on a personal skiing trip to Italy.

“When I heard the soldier’s stories about the ski race on Mangart, I immediately knew I needed to make this film. Mangart isn’t just a documentary about a mountain – it’s an epic story carved into history that will forever tell the legacy of the 10th Mountain Division,” said Chris Anthony, Filmmaker, and Professional Skier. “And the story hits home with Colorado ties to Camp Hale where the 10th trained. Mission Mt. Mangart is a film for everyone who loves to ski and appreciates the mountains.”

History in the Making
Mission Mt. Mangart leads up to Germany’s surrender to Italy on May 2, 1945, and how the Division ended up as peacekeepers on the Yugoslavian border in the Julian Alps until July 1945. At that time, Yugoslavian Dictator Joseph Tito had pushed his Army over the Italian border into the region of Mt. Mangart, where he attempted to hold the line.

During previous combat, the 10th had successfully obtained a supply of German ski gear, hoping the stash would prove helpful. As they gazed upon Mt. Mangart’s massive snowfield, they remembered that before they were soldiers, they were skiers.
The story of the 10th Mountain Division is intertwined with Anthony’s six-year journey of self-discovery in this period of history. To complete this massive undertaking, Anthony received aid from the Slovenian Association of Mountain Soldiers, NATO, The Slovenian Mountain Troops, the Slovenian Ministry of Defense, and the United States Embassy in Slovenia, as well as assistance from retired Slovenian Brigadier General Janez Kavar – now a historian of mountain troops.

Mission Mt. Mangart Tour Dates
Similar to Anthony’s previous documentary efforts that he completed in partnership with Warren Miller Entertainment and the Colorado Snowsports Museum, Climb to Glory, Anthony aims to keep the legacy and sacrifices made by American troops alive on film.