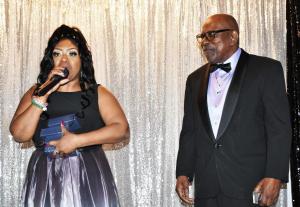 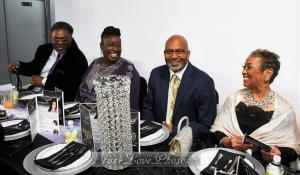 Honorees having a good time at the awards gala

ATLANTA, GA, UNITED STATES, December 15, 2022 /EINPresswire.com/ — All roads led to Atlanta December 3, 2022, to the Inaugural Bosses and Bossettas Platinum Awards Gala. Honoring people in the city of Atlanta, surrounding cities and states. The night kicked off with over 250 people including the honorees, finalist and their families gracing the red carpet for photos captured by Jus 4 Love Photos. Queen Gill hosted along with the Bosses and Bossettas.

God gave Michelle Lovett a vision to award and recognize individuals based on talent and not affiliation.

Special Guests in attendance were DeAnna Hurt, Ivan Thomas, and many more.

Denise Armstrong, best known for her appearances on Greenleaf and Overcomer received the Lifetime Overcomer Award. During her acceptance speech she told the audience to stretch their hands toward the founder and visionary to say Rest and Receive.

Carla M. Jordan (Fashion Designer of the Year Award) presented the audience with a jaw-dropping JON-LUC’ fashion show with her customized pieces from her ‘Bee Collection’.

The food was outstanding and catered from various businesses such as Taste of the Dirty South, Shan’s Catering, and the legendary Chef Maurice. Guests also enjoyed the 360 booth by 360 Memorie Booth.

Michelle Lovett is an award-winning actor, writer, curator coach, publisher, 4X bestselling author, and creator of the series “Life, Love, & Lock.” A Miami native, Lovett has defied the odds since birth. Being born prematurely with a hole in her heart and asthma, doctors said she would not live 72 hours. As an adult with many major health challenges, doctors gave her only six months to live. Years later, she is still proving the doctors wrong. Lovett says, “God made me a general, so I’m good by myself, but I realized we are a force when we win together. We don’t compete, we complete each other.”

January 20, 2023, Is Michelle Lovett Day in Florida City, FL. Stay tuned for the details of the festivities.