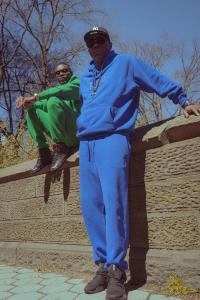 NY, USA, September 16, 2022 /EINPresswire.com/ — For over 30 years Franklin Williams aka Frankie Sly has been churning out songs that make the connection. His craft has taken him all over Europe, the Caribbean and the United States as well as Japan. Born and raised in East Kingston, the Windward Road All-Age and Wolmers High School past student had only one thing on his mind – and that was his passion for music. He credits John John and Stone Love’s Winston ‘Wee Pow’ Powell for giving him the opportunity to wet his feet in the music business. Soon he was working with other producers such as Dave Kelly; someone he rates as ‘the greatest dancehall producer’. He has also worked with producers such as Penthouse’s Donovan Germain, Bobby Digital, and Patrick Roberts among others.

After migrating in early 2000 to New York, USA, Frankie Sly continued on his musical mission both recording and touring. Penning a mixture of hard-hitting songs and hardcore, Frankie Sly managed to connect with dancehall lovers across the globe with songs such as Fassyhole, Wah Wah (Madhouse), Six Six Six (Stone Love), and Grab It Up On The Punany (John John).

Carving a niche for himself in the highly competitive world of dancehall, Frankie Sly has shared the stage with some of the biggest names in the industry and has seen his craft taking him all over the globe. Frankie Sly’s latest project A Nuh Jamaica Dis has been receiving overwhelming responses as violence weary listeners soak up the message in the song. Describing himself as humble – maybe too humble, he said being the positive person he is, he tries to stay away from negativity. Someone who enjoys all genre of music, he said when it comes to expressing himself, he is not limited.His creativity is evident in the lyrics he pens as depending on his mood it can range from lover’s rock or hardcore, but these days he is into using his voice to make a change.

Looking ahead, Frankie Sly shares that he has a lot of singles in the pipeline including combinations with other artistes. The entertainer reveals that the only other passion that can compete with his love for music is cooking, and just like music he is super creative in the kitchen also. After over 30 years and numerous songs, Frankie Sly is yet to record an album and he is hoping that this year – with the new fire burning within him, he will accomplish that.

Making the video for “Party All Night Long” by Wayne Wonder and Frankie Sly was a whole vibe. Pete Starr, the Ceo of 1 House Records, who produced the track had some grand ideas for the visuals. The video was shot at several locations throughout the South Florida area. These locations were Virginia Key Beach, Miami Beach Marina, an unplanned video shoot at Snyder Park, and a club scene in an actual party “Backyaad Miami.”

Stay up to date on the latest with Wayne Wonder (@waynewondermusic) and Frankie Sly (@frankieslymusic) on Instagram.