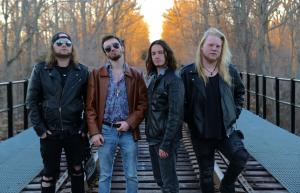 Zenora releases new single and video off of upcoming album

Catch a Break is about waiting for something that never comes”

“Catch a Break is about waiting for something that never comes,” says lead singer and guitarist Dylan Graff. “Inspiration for this song comes from the human experience, heartbreak, those times in life when you want something that you can’t reach. We want our music to speak to people, to evoke emotions, and to respect what rock n roll is – expression of the human experience.”

Zenora has been making waves since releasing their first self-titled EP in March 2020. Since then they have released the Bring Back Rock n Roll EP, and their upcoming full length album is slated for release later in 2022. The band was selected as ‘Artist of the Month” by major Philadelphia rock radio station 93.3 WMMR, and has opened for national acts like Quiet Riot, Anvil, Tantric, and Kickin’ Valentina. Zenora was also part of the bill at the recent Masquerade Rock Festival in Philadelphia, sharing the stage with veteran rockers Stephen Adler (formerly of Guns n Roses), Autograph, Dirty Looks, Tokyo Motor Fist, and many others. Zenora has also made headlines in regional publications and music blogs, such as The New Jersey Digest, Asbury Park Press, and Flirt Magazine.

“Zenora is just getting started,” says Dylan. “We are constantly writing and creating, experimenting with new sounds. While our new album is releasing later this year, we are already working on new material for the next project. We want to take this band to the next level, and we are blessed to have great mentors and supporters around us.”

Lead guitarist Nick Shute has big plans for the band too. “Each member of Zenora is special part of a bigger cause, and each of us brings a unique perspective and contribution to our creations,” says Nick. “We can’t wait for the world to hear our music and see us perform. We are truly a live band that brings energy and power to the stage.”

“Catch a Break” is available on all major streaming platforms, and can be downloaded on their website zenoramusic.com. While you’re there, check out the video, or you can view it on YouTube.