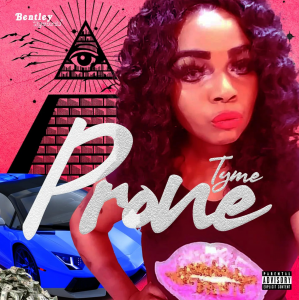 LOS ANGELES, CALIFORNIA, UNITED STATES, August 4, 2022 /EINPresswire.com/ — For this Phoenix, Arizona-based rapper and musician, the present is about being “…young, angry and pretty, and infiltrating your city….” Tyme is an emerging artist who is all set to release her forthcoming album, “Prone.” Tyme teamed up with NY producer Kid Ocean and Bentley Records to create this compelling record.

Her unique catchphrase represents her “strike-while-the-iron-is-hot” mentality. “This is about me coming to the world and showing you my stuff and music and how I put myself out there for everyone to see. I’ve got singles out on the major platforms, and I’ve finally made it my priority to pursue my music career!”

“Prone” isn’t just the album title; it’s also the carrier single of the entire record. To date, she released 8 singles on SoundCloud so that her fans can watch the album come together piece by piece. “I’m excited to see my music skills improve with each new song I write,” she says. “It’s thrilling to see my progress and development as an artist.”

In the song “Prone,” Tyme warns people not to cross her, or they will face the consequences. “Hold my phone ’cause if you act up, I’m prone,” she raps in the chorus. “It’s a line in the song that represents who I am; that I’ll eff them up if they come onto me wrong or try to down me. I’m prone, and I’m prone to making money, I’m prone to do things, I’m going to do it, I’m prone to. It’s the name of the first song, and I thought it would be a great album title.”

Despite the passion and drive oozing from the title track, Tyme comments that her music combines rap, hip-hop, and R&B in fun ways. As someone who’s been musically inclined all her life before getting into rap at 19, her inspirations shaped how she creates songs. “My main influences are Nicki Minaj, Beyonce, and Rihanna, so I’ve always had this mindset of making catchy and hip music.”

Another catchy tune that will be featured in the album is “Lola the Bunny,” based on the character Lola Bunny from the movie Space Jam, whom Tyme represents as her alter ego. “It’s like I’m in a club and people looking at me funny, I’m just telling them I’m Lola the Bunny,” she raps. “It is a fun song, very catchy, and listeners can learn the lyrics right away.” Indeed, Tyme can be serious but also knows how to have some fun.

Regarding her adamant drive to release her first record, she credits a car accident suffered last April 2022 as her “wake-up call.” While “Prone” could have released then, she took time off to heal. Now fully recovered, she says her first album is just the beginning of something special. “I’ve always loved music and wanted to pursue it as a career. The accident put that into perspective. Those months of recovering made me feel like I missed so much, so now I just want to go for it before it’s too late.”

Certainly, for this determined talent, her Tyme has come.

Listen to Tyme’s music via SoundCloud. And make sure to follow her via Instagram. You can also catch her live performance at the Rhythm Room on August 21, 2022. Get your tickets at https://myafton.com/TymeisProne!