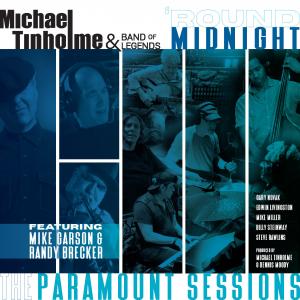 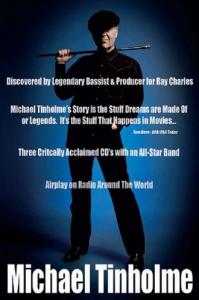 The reuniting of legendary musicians and old friends Mike Garson and Randy Brecker brought back together on a magical recording of Thelonious Monk’s classic “Round Midnight” with a Band of Legends.

Then there is the deep respect and love among these legendary players for the genius of Thelonius Monk.

Michael Tinholme’s incredible story just adds to the impact of his new Masterpiece that is “Round Midnight”!

Working alongside David Bowie and Michael Jackson’s collaborators. Being an artist with worldwide airplay. Brokering a hundred-million-dollar deal with Disney-Pixar and SGI without any formal education. Any one of these things would be almost impossible for anyone, but singer-songwriter Michael Tinholme overcame the most impossible odds to make all of these a reality.

As a child Michael was adopted into a turbulent household. With his father often away as a Lieutenant in the army, and his mother suffering from serious mental health issues, Michael had to battle through abuse and care for his younger siblings. Michael found sanctuary and the freedom to pursue his dreams of making music in the club The Four Muses, who brought him on as an opening act for legendary artists such as Bill Medley, Melody and Jennifer Warren. Michael Tinholme found a friendship and mentor under the wing of Scatman Carruthers (Chico and the Man, The Shining).

Unfortunately, things reached a breaking point when Michael had to leave home days before his 16th birthday, starting his 6-year stretch of self-exile and homelessness. He hitchhiked up and down the 5 Freeway in California and the Pacific Coast Highway, panhandling, dishwashing, and doing day labour. Eventually he had to steal to feed himself and became self-destructive. Aged 20, he met a former pimp by the name of Fast Eddie Valentine who saw potential in Michael and who got him accommodations and helped him back on his feet.

With no high school diploma, and having faked graduating, Michael worked for free as a computer salesman, quickly working his way up and within a few years he became part of America’s technology revolution. Despite his rough background, Michael went on to be one of the first to sell industrial robots in California, and was one of the first to consult with General Dynamics following the Challenger disaster. He eventually graduated to selling ‘Silicone Graphic’ workstations and CGI software to Pixar, and Industrial Light and Magic, the tools needed for their major motion picture Toy Story and many others, contributing to the change of the media landscape. A $100M deal for Disney Burbank, one of the largest orders of its kind.

Armed with success, Michael returned to his true passion – music. Despite playing his first professional show aged 12, Michael released his first CD decades later with – ‘The House of Jazz’. Conducting the orchestra on Michael’s first album was legendary Bruce Fowler, conductor of the largest movie symphony orchestra to date for, ‘The Dark Knight’.

Industry titans like the BBC, NPR, USA Today, have recognized the spark that is Michael Tinholme. Listen to “Round Midnight” featuring Mike Garson and Randy Brecker and we think you will too.