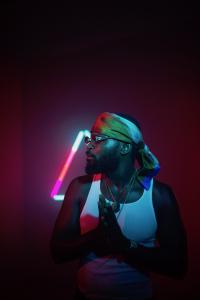 Tomi Tribe Is Helping Push The Afrobeats Movement In LA

My career goals right now are creating as many superstars from Africa as possible,” he says. “There are so many talented artists in Africa that don’t have the proper guidance and outlets.”

In Los Angeles, Nigerian-American Tomi Tribe has been at the crux of exporting Afrobeats to different communities in LA. Born Tomi Atolagbe, he is currently based in DTLA but bred in Riverside, CA, Tomi has been throwing weekly parties creating a lane for Afrobeats in the city of angels. But it didn’t come without barricades and obstacles in the way.

“Being a first generation Nigerian in America, it was hard to not walk in the traditional African path of doctor, lawyer, dentist etc.” Tomi unveils. “Lack of support from the community/family made things difficult but also motivational” says the vibes curator.

A vital Afrobeats integrator in LA, Tomi has been able to utilize his business savvy and affiliations to be a tastemaker with unique business standing. His business acumen he says was forged by his father who is a doctor and entrepreneur, simultaneously you can attribute his style to his cultural background.

“It’s in my culture,” he says. “The Yoruba people of Nigeria are known for music, parties and enjoyment. My father is a doctor and businessman, so I grew up working for the family business and that gave me the entrepreneur spirit. I’ve never had a job in my adult life, so I’ve always had to hustle to live.”

Through his imprint, Triibe Viibes, they have become the most influential Afrobeats events company in Los Angeles garnering international attention as the home of official concert after parties for Wizkid, Tiwa Savage, DJ Tunez, ECOOL, and more. Afrobeats Hollywood at Station 1640 is the first weekly Afrobeats party in LA history.

Gearing up for his maiden EP this November, the trendsetting music-man is preparing another culture-shifting EP that will largely express his sound and vibe. The project will feature a handful of songs with established Nigerian acts such as Peruzzi, weaving through bursting Nigerian Alt sounds in PrettyBoyDO.

“It will showcase my range as a producer,” Tomi says. “It’s called Vibrations Vol.1 E.P. The songs are ‘What You Need’ with Cocoa Sarai, ‘La La’ with Peruzzi, and a duet with Cocoa & Peruzzi ready for December.”

He also says he intends to release it before a month-long trip to Africa which is known to peak in the December time, since December is a holiday-summer-esque vibe where concerts, festivals and artists classify it as a busy period of work and networking.

Inspired by pioneers such as Fela Kuti, Diddy, Ye, Wizkid and Gucci Mane to mention a few, something parallel of all the aforementioned names is their ability to commercialize their music, brands and also uplift other artists. A common factor with Tomi who hopes to raise the profile of African music to wider audiences.

“My career goals right now are creating as many superstars from Africa as possible,” he says. “There are so many talented artists in Africa that don’t have the proper guidance and outlets. Africa is the future”

Look out for this future mogul in the music business and craft scene.