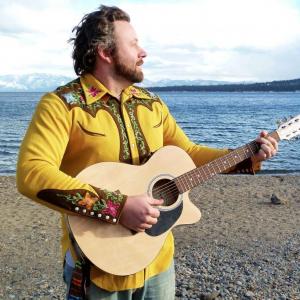 Matt Axton’s Blue Sky Rain sounds like it could be on a television series or movie soundtrack. The Blue Sky Rain video is a beautiful piece that lends a visual landscape to his smooth distinct vocals.”

Blue Sky Rain is a light but bittersweet Americana country love song about the surprises of love and loss and the happiness you can still find in the end.

Matt Axton says, “I got the inspiration from some bad moments on an otherwise great day in which I came to a surprising realization, love can be found and grown but might not be meant to be. But the search for true joy will win in the end..”

The song is moving, witty, floaty, longing, and light.

“Matt Axton’s Blue Sky Rain sounds like it could be on a television series or movie soundtrack,” praises Diane Lockner, Triple Tigers Records in Nashville. “This feels like it could find a home in the Triple A/Americana format. Add to that the lineage of Matt and you’ve got a cool story.”

The video, which was shot in the Joshua Tree desert, expands on the tale of the song by focusing on the ups and downs of a relationship. The film begins with Matt alone in the desert terrain, then cuts to a star-filled evening picnic with his beloved dancing in the rain. In the couple’s house, these romantic moments are paired with an argument. The video shifts between Matt singing and reminiscing then moves to sweet moments between the pair and some new difficulties. Told in a mini-movie format the video leaves it up to the spectator to decide whether or not they are meant to be and will reunite again.

“The Blue Sky Rain video is a beautiful piece of art,” Lockner says, “that lends a visual landscape to his smooth, distinct vocals.”

Matt Axton is a songwriter, vocalist, guitarist, solo performer, and bandleader with a wide range of skills. His music is a combination of folk, funk, country, blues, and rock that he describes as a “humble slice of Americana.” Matt was born and raised at Lake Tahoe, California, and traveled to Los Angeles to bring his mountain tunes to the city, carrying on the family tradition. Boasting over 300 original songs, Matt is making his mark in the musical universe with a video release of Blue Sky Rain and continuing a family musical legacy that began with his grandmother Mae Boren Axton, who co-wrote Heartbreak Hotel for Elvis and continued with his father, Hoyt Axton, a Legendary country-folk star with dozens of hits under his belt. like Joy to the World (“Jeremiah was a bullfrog”), Never been to Spain, The Pusher, and many others.