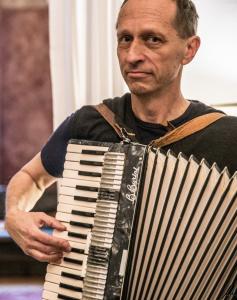 All we are saying, is give peace a chance!”

STEYR, OBERöSTERREICH, ÖSTERREICH, March 21, 2022 /EINPresswire.com/ — In these days there are many support concerts for Ukraine all over the world. The musician Peter Czermak from Austria was inspired by the protest action of the journalist Marina Ovsyannikova in the Russian TV studio. In “The Black Eyes of Marina Ovsyannikova”, her appeals to Russian citizens are set form of a song: “So come out to protest. And do not be afraid. They cannot put everybody in jail…“

The melody of the well-known Russian folk song “Ochi chornye” is used for this. This song itself is a symbol of the brotherhood of Russia and Ukraine. The original text was written by the Ukrainian poet Yevhen Hrebinka in 1843.

The song was published on Youtube and is available under “The Black Eyes of Marina Ovsyannikova”. https://youtu.be/Yn_La9MvQG8

With this, Peter Czermak starts a solidarity campaign for Marina Ovsyannikova and calls on musicians all over the world to sing this song in their native language and to post it on YouTube. Any license income for the text will be used as a donation for those who have been persecuted or displaced in Russia or Ukraine.

The motivation for Peter Czermak can be found in a quote from John Lennon: “All we are saying, is give peace a chance!”

The “Black Eyes” of Marina Ovsyannikova