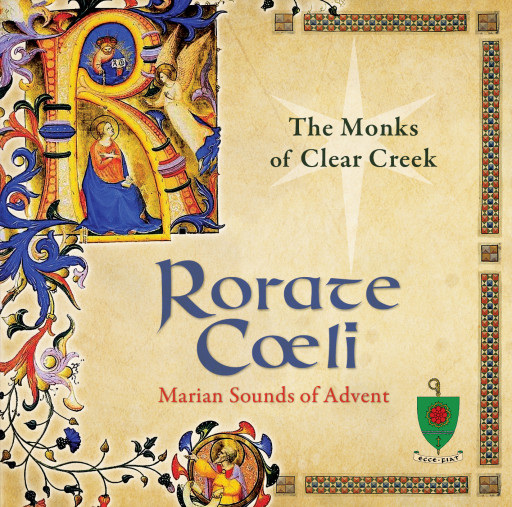 Today, Sept. 9, De Montfort Music, under its new home at Sophia Music Group, marks the release of Rorate Cœli: Marian Sounds of Advent by The Monks of Clear Creek.  This will be the first global release from the recently inked label signing with The Monks of Clear Creek.  Established out of France's venerable Notre-Dame de Fontgombault Abbey, of the Solesmes Congregation, this growing U.S. monastic community is based in the U.S. Ozarks. The Monks of Clear Creek is comprised of over 60 men, representing a variety of cultural backgrounds. Both Benedictine tradition and the Clear Creek community's heritage as part of the Solesmes Congregation entail a great appreciation for the ancient, sacred music of Gregorian chant - the plainchant that started developing as long ago as the ninth century, enduring across many civilizations to the present day.

About the music-making at Clear Creek Abbey, Abbot Philip Anderson says: "The power of music is that it does amazing things in one's soul, something that even Plato recognized. This chant is a vehicle that allows us to express the faith and prayer of praise that's so characteristic of the Benedictine way of life. Marrying sacred texts to music, to singing, can result in a beautiful experience."

The album was produced and engineered by the multiple Grammy Award-winning producer Brad Michel, who describes The Monks' music as "not performed, but rather lived and believed... When an artist is living every word like that, it's impossible not to get caught up in the experience."

'Rorate Cœli' follows other successful recordings from De Montfort Music/AimHigher, who accounted for many of Billboard's #1 Classical Traditional Album Imprints of the past decade. Recorded in surround sound for release with Apple Music's Spatial Audio with Dolby Atmos, 'Rorate Cœli' features music from a Mass of Our Lady in Advent and a Mass for the Vigil of Christmas, which were recorded at Clear Creek Abbey. Some pieces on the album are sung by the entire group, some by smaller ensembles of monks and others by soloists, lending a vast range of sound and color to this classic new recording.