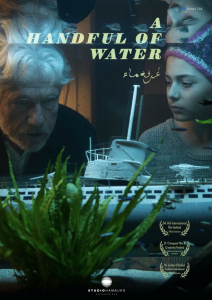 A Handful of Water

A Handful of Water is nominated for Best Feature Film and Best Cinematographer at the LA Festival of Cinema.

A HANDFUL OF WATER

An indie film about a cautious friendship and a shared history, a thriller about deportation and unwilling dependence on others, an arthouse film about loneliness and the meaning of life – after over thirty international and eight U.S. festivals, including nominations at Cinequest and Catalina, winning the Sabian Award for Human Rights and Dignity in Tryon and two awards at the Socially Relevant Film Festival NY, we are proud to announce A Handful of Water will compete for

Praised by German press as “a happening” with outstanding acting and directing and described as “a story you tell yourself for comfort when reality threatens to become unbearable” (Georg Seeßlen), this film could not be more nowadays than today.

KONRAD (85) has plenty of reasons for being grumpy. His wife died recently and now his only daughter’s even talking about adopting her girlfriend’s kids! He doesn’t approve.

THURBA (12) has a very different set of problems. In order to avoid deportation from Germany to Bulgaria as a so-called Dublin-Case she must jump from her apartment on the 2nd floor and run. But then she’s alone, out on the streets, in November.

One night when Konrad heard something from the basement, he arms himself with a nail gun and fires into the darkness. He shoots little Thurba, who cries out in pain. Konrad is completely jumbled, this can’t be happening!

Somehow this girl gets to him, touches long lost feelings of his own past and makes him dependent on somebody else’s luck again. Having to flee abroad to the UK, Thurba is depending on Konrads help. So she proposes a deal…

The LA Festival of Cinema aspires to showcase the newest talents in the independent film industry and create an event where films of different backgrounds can provide entertainment for anyone who is a fan of cinema.

After eleven awards and twelve nominations worldwide as well as successful California screenings at Catalina Film Festival, Cinequest San Francisco and Int’l Diversity Film Fest Los Angeles, this is the latest opportunity to watch A HANDFUL OF WATER in the US.

We would love for you to watch the movie and reach out and drop us a line how you like it!

A Handful of Water Trailer